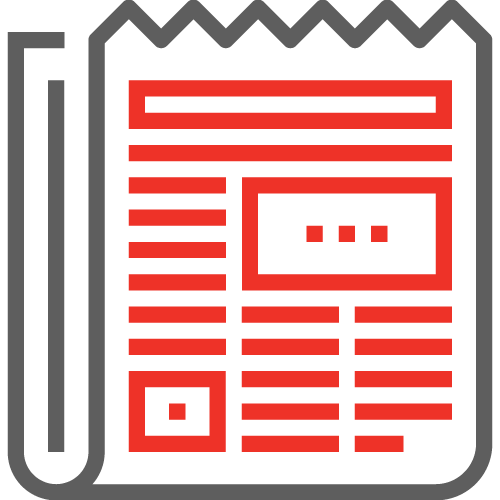 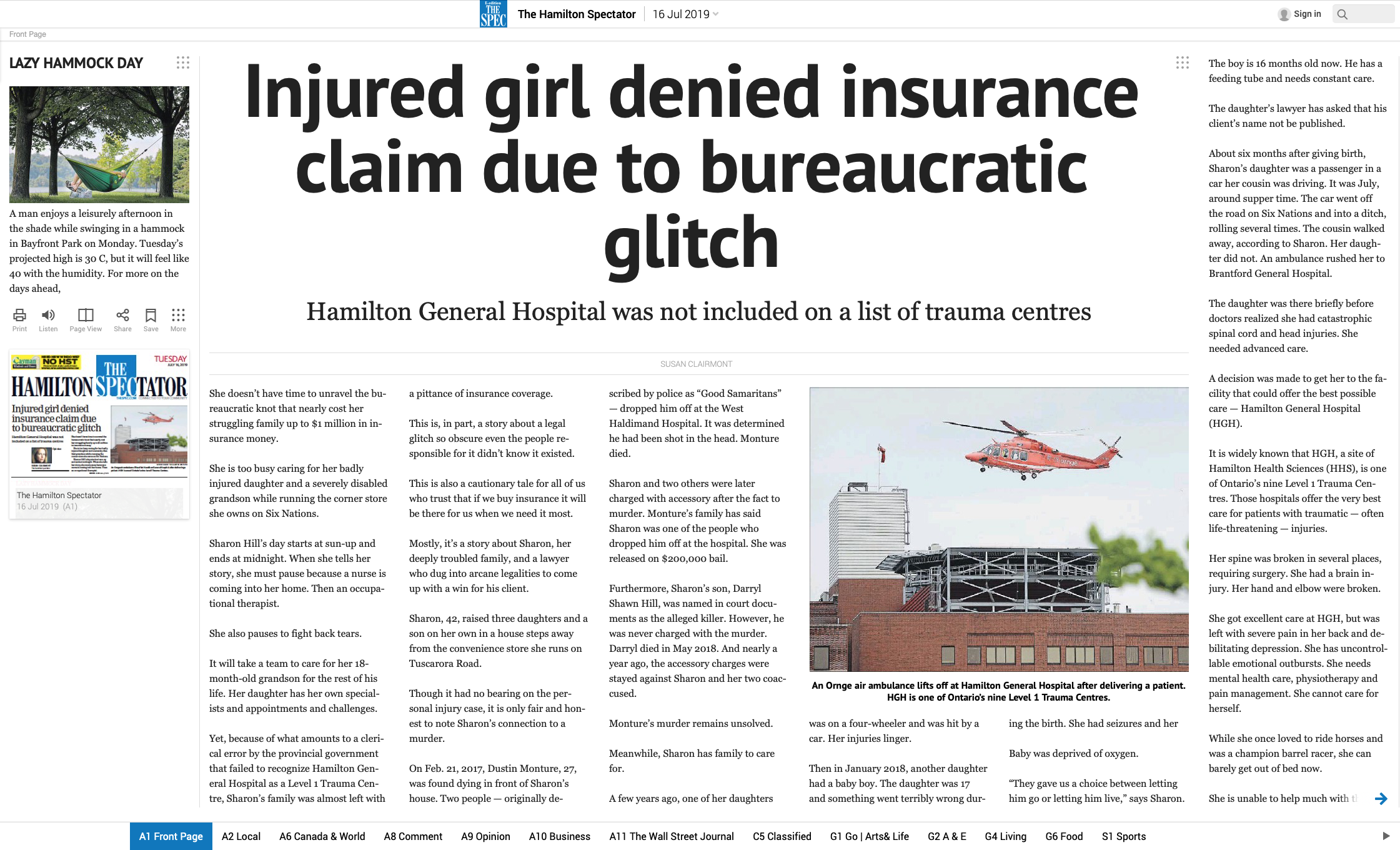 He was featured because while fighting on behalf of a young teenage girl who sustained a catastrophic traumatic brain injury and multiple spinal cord fractures following a horrific motor vehicle accident, he uncovered a legal bureaucratic glitch in the Insurance Act (https://www.ontario.ca/laws/statute/90i08), which had discriminatory ramifications based on geography.

The glitch, which was so obscure that even the people responsible for it didn’t know it existed, would’ve left his client with a pittance of insurance coverage, because her insurer relied on it to deny hundreds of thousands of dollars in medical and rehabilitation treatment, and attendant care.

Rudder fought for this girl, who is the young mother of a severely disabled child with a feeding tube and in need of constant care, after taking a deep dive into legal precedents, obscure legal documents, policies and guidelines, and the historical evolution of catastrophic impairment law from the 1990s to the present day. He then used sound legal arguments to persuade the insurance company to give his client a catastrophic impairment designation, which increased her first-party insurance policy limits from $65,000.00 to $1 million, to provide for her treatment, care services, and support.

“When there’s a marginalized group and an imbalance of power – that pulls my heartstrings,” Rudder says. “I couldn’t sleep. It kept me up. It made no sense to me whatsoever.”

Since Rudder had no way of knowing if this glitch cost other teenage patients or not, he then met with the Financial Services Regulatory Authority of Ontario to convince them to conduct a thorough examination of its existing guidance documents. He ultimately persuaded them to amend the Superintendent Guidelines 01/16 to fix the glitch.

Ontario NDP Leader Andrea Horwath, who was interviewed in the Hamilton Spec cover story was quoted as saying:

“The insurance system is a racket in our province,” she says. “Depending on where you live, you have different access and you have discriminatory variables that affect you. Including if you don’t live anywhere near one of the 12 designated trauma centres. Then you’re out of luck.”

“And if you do happen to live near what is considered a major trauma centre and the insurance industry had decided they don’t consider it one, then you’re out of luck.”

“And so what we need to do is actually fix the insurance system to get rid of these inconsistencies and the inequality that’s built into the model that really just helps insurance companies to not pay out the benefits that families need.”

Rudder is motivated to fix the insurance system at both a provincial and national level, which was one of the primary influential factors in writing his published book, “Catastrophic Impairment Law in Canada.” 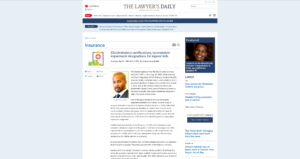 Rudder is a regular contributor to The Lawyer’s Daily, published by LexisNexis Canada, where he writes legal articles on catastrophic impairment law. 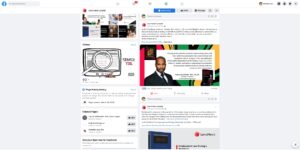 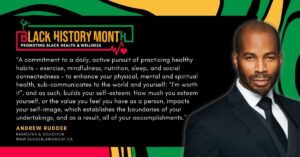 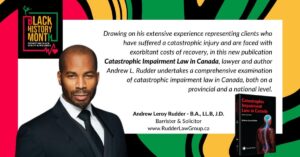 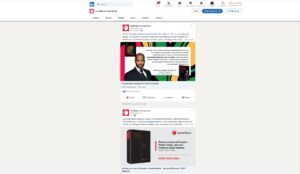 In January of 2022, Marketing Manager (Corporate & Brand), Ms. Natasha Vadori-Canini contacted Andrew Leroy Rudder on behalf of her employer and Mr. Rudder’s book publishing company, LexisNexis Canada Inc., in regards to their Black History Month Campaign for February 2022. Their theme for Black History Month was supporting health and wellness in the black community, and they wanted to feature Mr. Rudder in an author spotlight and highlight his book entitled “Catastrophic Impairment Impairment Law in Canada”.

Eliminating Anti-Black Racism, which is a major contributing factor to mental health and addictions, especially in the Black community, and can negatively impact the quality of life, lifespan, personal relationships, and chronic disease risk, which can adversely affect a person’s level of self-esteem and self-worth, is an issue near and dear to Mr. Rudder’s heart, so he was humbled, honoured and proud to volunteer his time and participate in their noteworthy 2022 Black History Campaign.

One of the things that makes Mr. Rudder so proud to be a published author with LexisNexis Canada Inc., is that they “recognize the systematic racism rooted in Canadian history that reinforces beliefs, attitudes, prejudice, stereotyping, and/or discrimination towards people of Black descent”. Mr. Rudder is also very proud of the fact that they recognize that “Over the years, black people have faced many health disparities when compared to other races, especially when it comes to conditions like heart disease and diabetes which are more common in black communities than in others”. https://go.lexisnexis.ca/BlackHistoryMonth?utm_medium=social&utm_source=allnetworks&utm_campaign=CENTRAL-black-history-month

As part of LexisNexis Canada Inc.’s Black History Month Campaign, they asked Mr. Rudder the following question: “Why is it important to focus on health & wellness in the Black community?”

Mr. Rudder’s answer to their question was as follows:

A commitment to a daily, active pursuit of practicing healthy habits – exercise, mindfulness, nutrition, sleep, and social connectedness – to enhance your physical, mental and spiritual health, sub-communicates to the world and yourself: “I’m worth it”, and as such, builds your self-esteem. How much you esteem yourself, or the value you feel you have as a person, impacts your self-image, which establishes the boundaries of your undertakings, and as a result, all of your accomplishments. In the Black community, where the image of people of colour is oftentimes framed in negative stereotypes, having a solid self-image is not just important to keep the water of negativity out of your ship so it doesn’t sink, but also to change the perception people have of your community, as well as provide the next generation with images of positive role models to see themselves in, so they believe it’s possible to expand the boundaries of their undertakings too. – Andrew Leroy Rudder, Owner, Catastrophic Impairment Lawyer, & Published Author – www.RudderLawGroup.ca 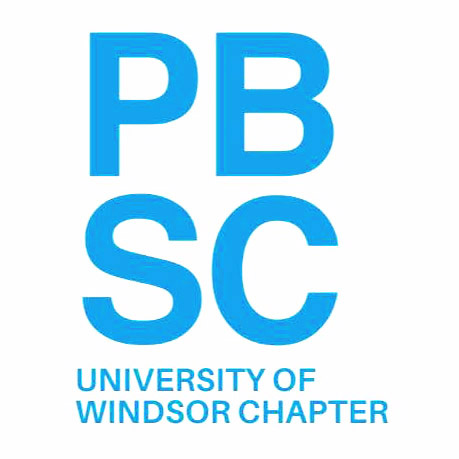 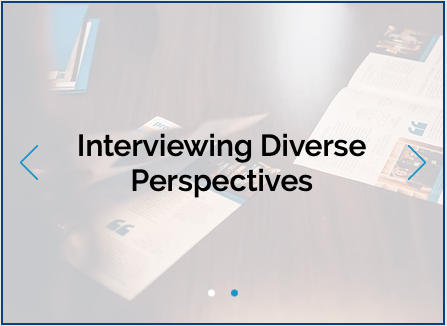 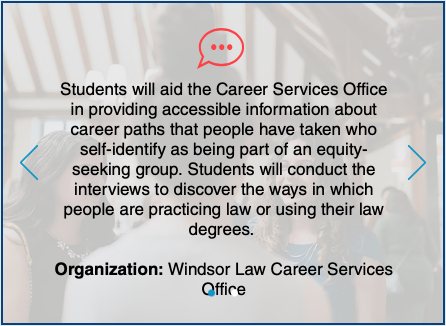 In January of 2022, first-year law student from the University of Windsor Faculty of Law, Ms. Sarah Fong, who volunteers with Pro Bono Students Canada, contacted Andrew Leroy Rudder about an exciting project geared toward promoting diversity in the legal profession. Ms. Fong and her team were working on an intriguing project called “Interviewing Diverse Perspectives”, in partnership with the Career Services Office. They hoped to learn from the perspectives of lawyers, such as Mr. Rudder, who identify as members of equity-seeking groups, in order to provide students with accessible career advice.

Mr. Rudder agreed to volunteer this time and participate by virtually connecting with them to talk about his experiences and perspectives, where he was interviewed with questions regarding his path to becoming a lawyer in an equity-seeking group. The interview was recorded and transcribed, an upon completion of the project, the responses of Mr. Rudder and other lawyers from equity-seeking groups will be compiled into a comprehensive report with helpful advice for Windsor Law students, in particular, and law students across Canada, in general. Mr. Rudder was honoured and humbled to be given the opportunity to participate in such a worthwhile endeavour, and was happy to assist them in providing helpful advice for law students, and ultimately contribute to promoting more equity in the legal profession. 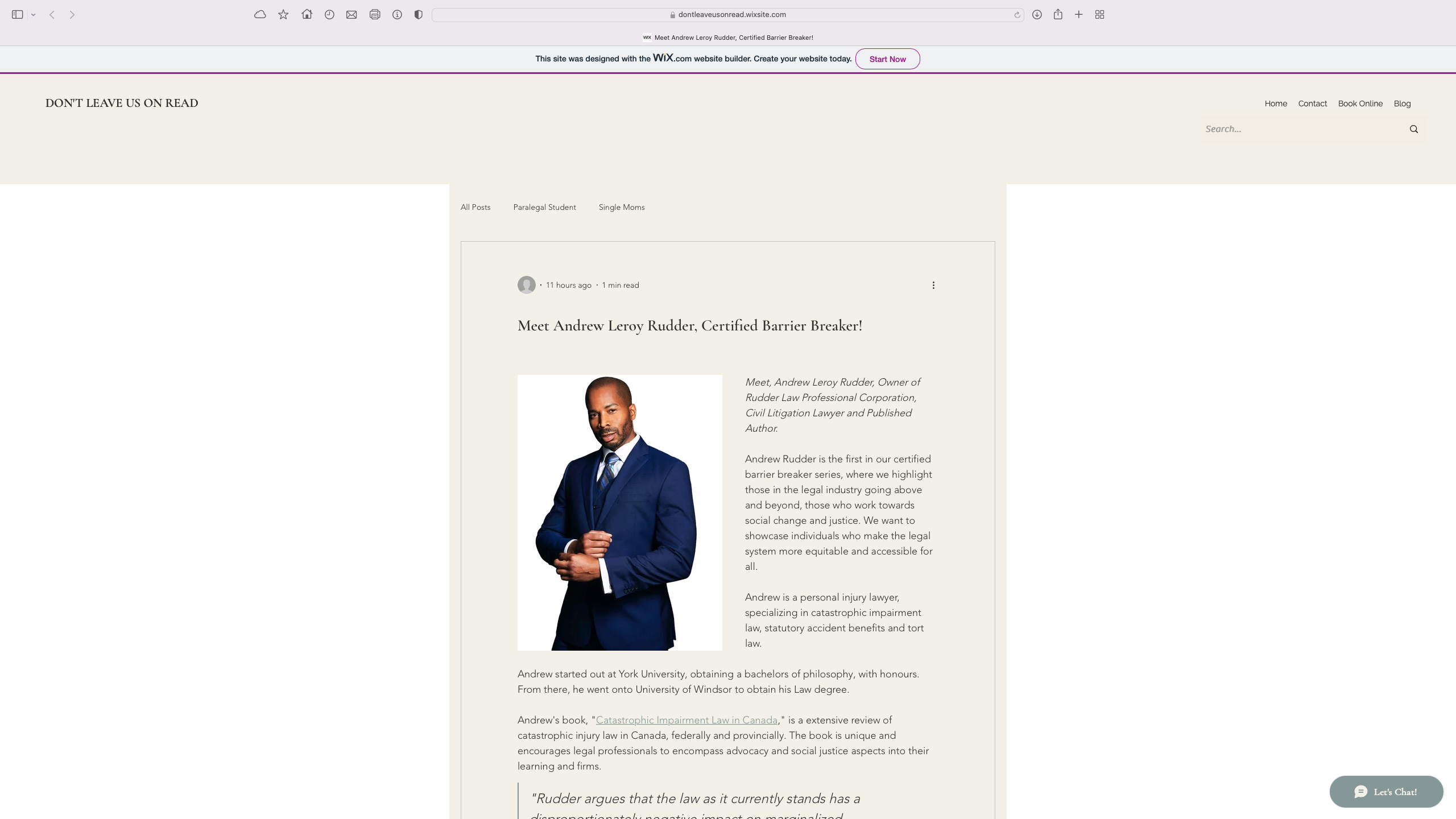 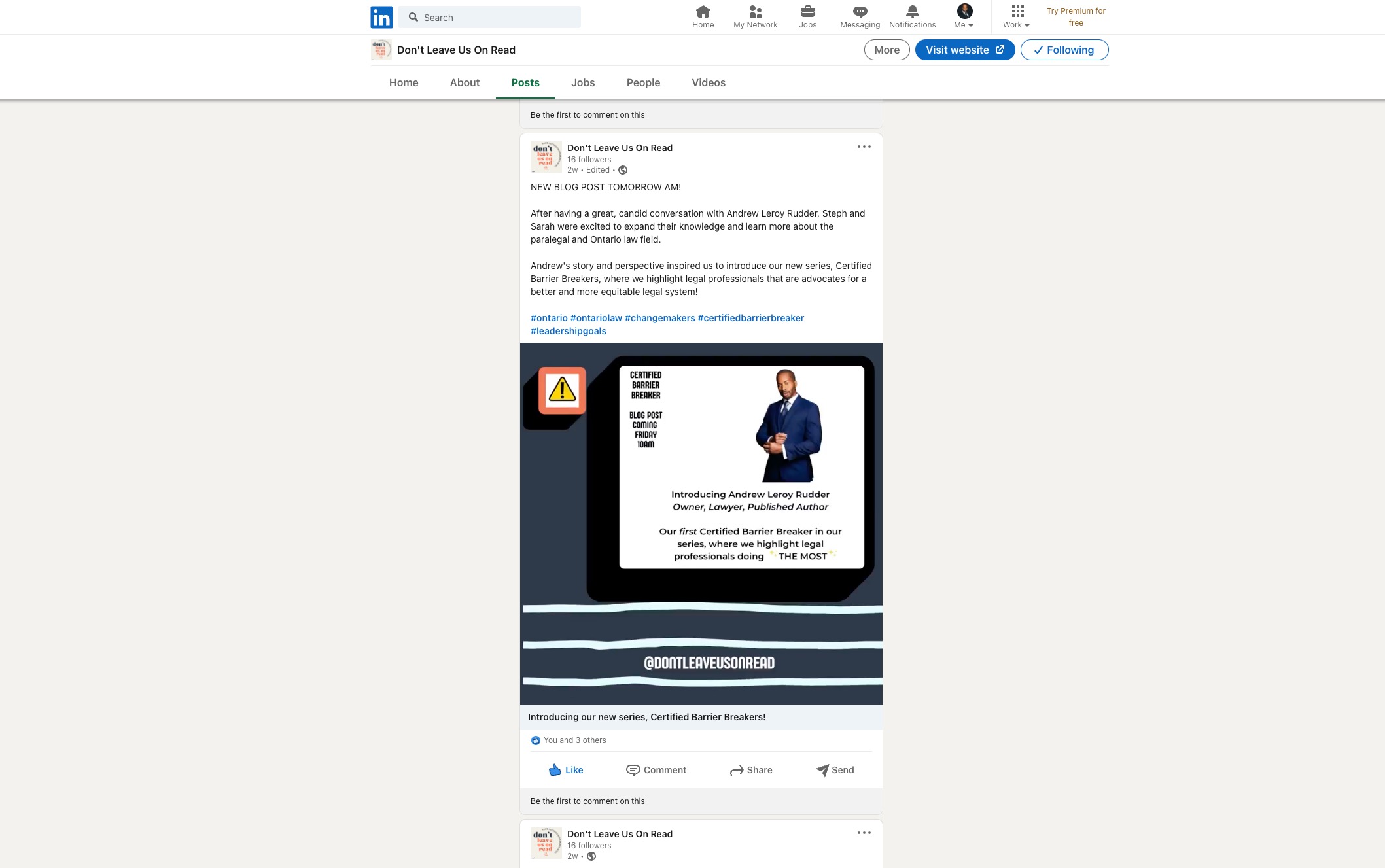 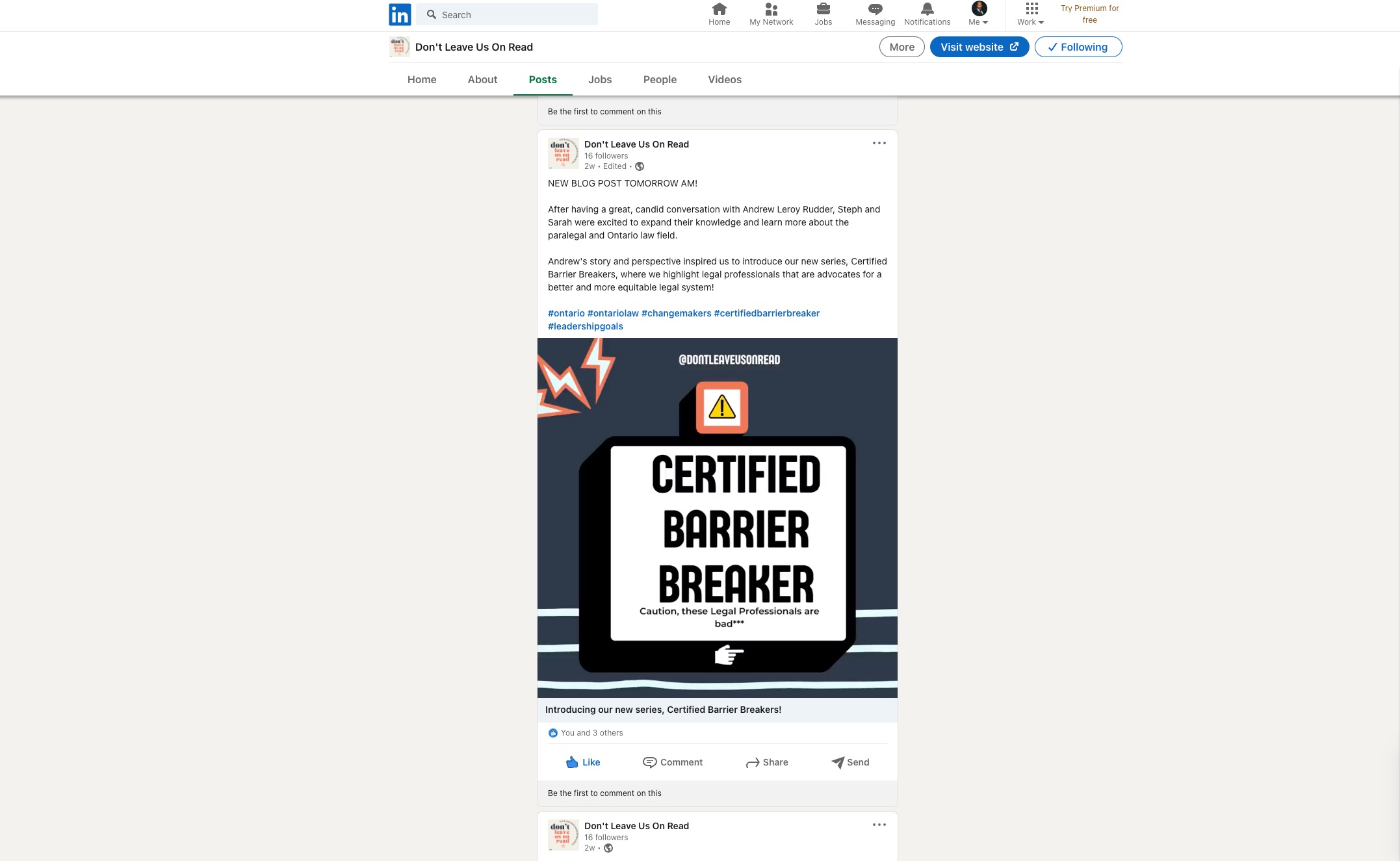 Paralegals Stephanie Dunbar and Sarah J. Coons, feature us in their popular blog entitled “Don’t Leave Us On Read.”

Andrew Leroy Rudder was featured by Paralegals Stephanie Dunbar and Sarah J. Coons in their popular blog entitled “Don’t Leave Us On Read”, as the first one in their “Certified Barrier Breaker” series, where they highlight those persons in the legal industry going above and beyond the call of duty, and those who work tirelessly towards social change and justice. They showcase individuals like Mr. Rudder who make the legal system more equitable and accessible for all. 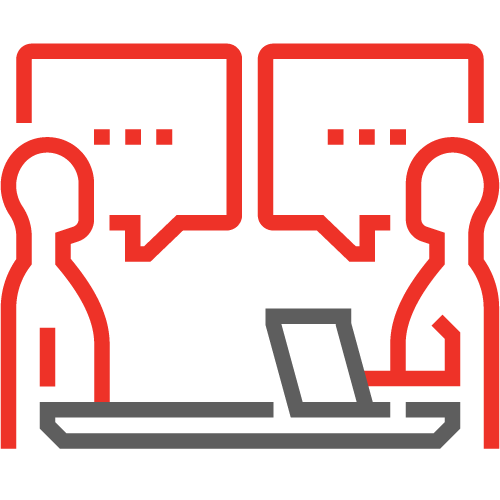